Welcome to learn more about our skippers and coaches 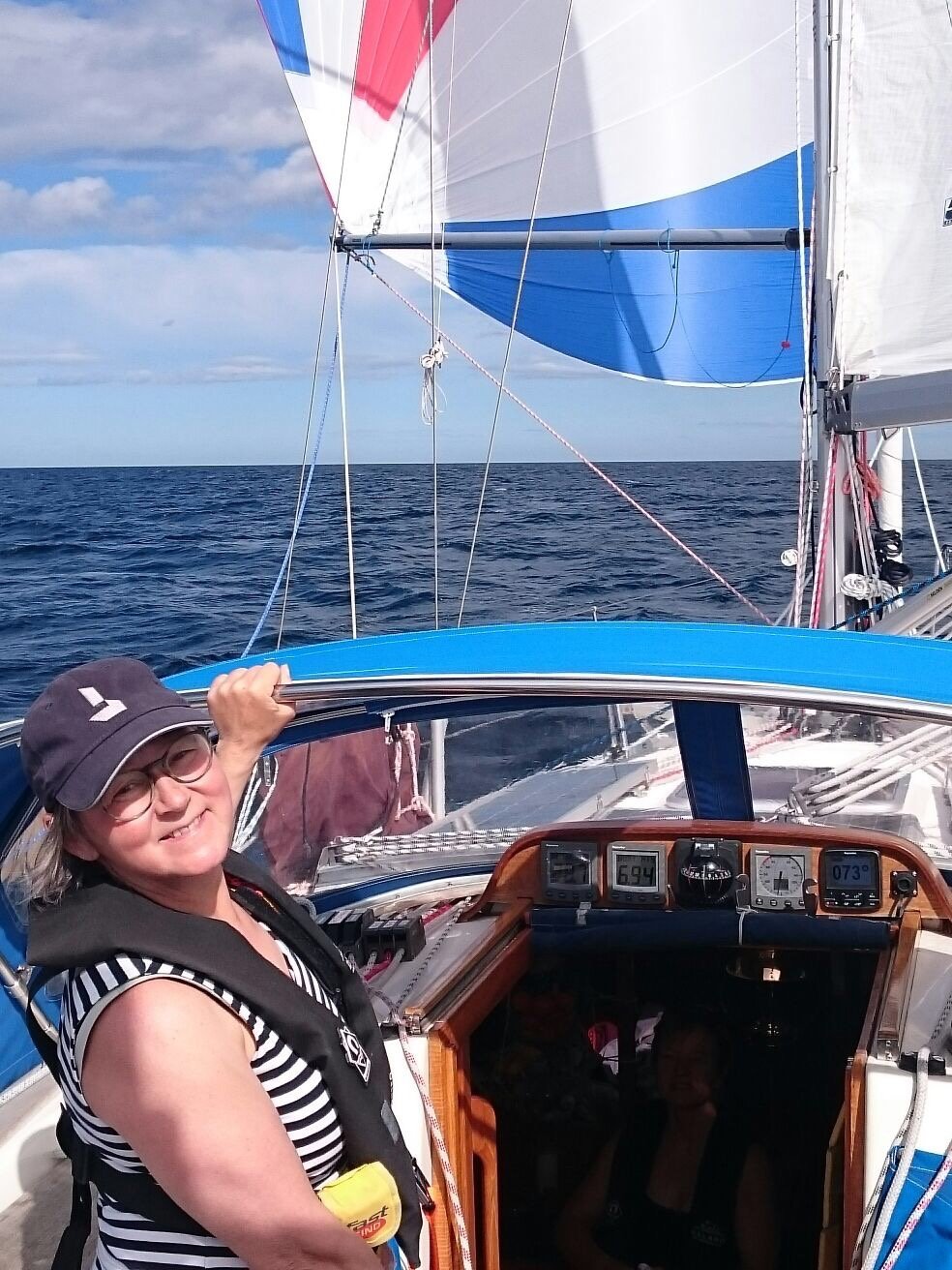 “My name is Birgitta Silfverhielm. I am the owner of Vind o Vatten and the skipper of Esmeralda II. This is my history in brief:

I grew up with sailing. Since the early 60’s, I have had the east coast archipelago as my playground during the summer. When I left home at 18, I immediately bought myself a boat, and began to dream about sailing beyond the horizon. At 25, I sailed from Stockholm as crew on a sailboat bound for the Caribbean. After eight months, I was home again, and just wanted to continue sailing… I got a job as a sailing instructor, and for many years I taught adults to sail. After 18 seasons and four boats, it was time for me to start up something new. Thoughts of developing sailing activities based on my own experience took shape, and I started to run private sailing courses, skippered charter, single and multi- day tours, and holiday adventures for families and groups. I developed a personal approach, with respect to the customer’s individual needs.

In 2008, I bought the Linjett 35. This is a real quality boat that meets the highest standards of comforts and sailing performance.”

Birgitta’s education and experience in brief:

Birgitta brings solid experience cruising in the Swedish Archipelago, as well as racing and ocean sailing. Her motivation to keep on with sailing is life-long. She has already sailed in most kind of waters and circumstances, from dinghies to big ships and from competing on racecourses to crossing oceans. She has been a part of the Search and Rescue crew on Dalarö, where she acted as a navigator and deck crew.

Skipper of Terezza and sailing coach

Ulrika Lewander is the skipper of Terezza. She teaches sailing in an easy and reassuring way according to the methods of Vind o Vatten.

Ulrika’s education and experience in brief: 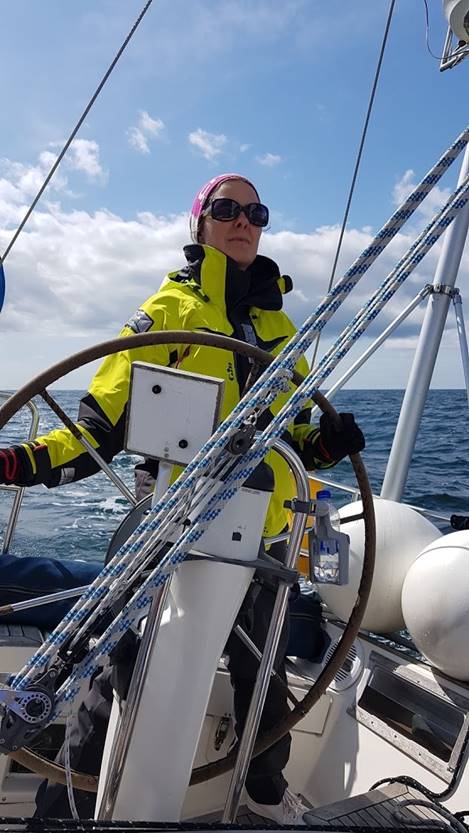 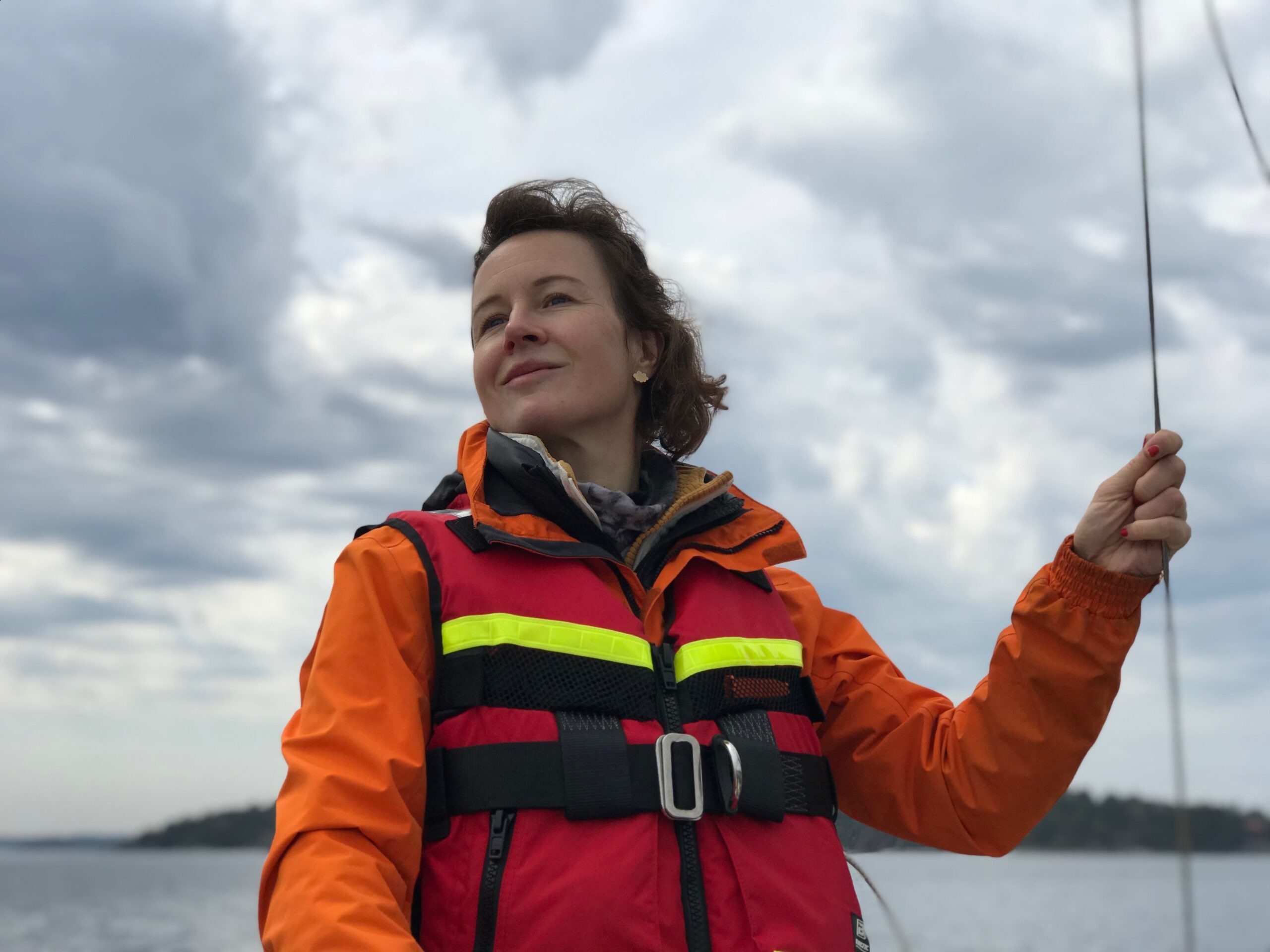 Karin Modigh is the skipper of Isola. She is a windsurfer, a tall ship sailor and almost anything in between. She has crossed the Mediterranean and the South China Sea, but her favourite waters remain the Stockholm archipelago.

Karin is calm, driven by curiosity and has practiced leadership in many different contexts. As a skipper on her own Beason 36 Isola, Karin teaches sailing and brings guests to discover the Stockholm archipelago. She is also our French-speaking skipper!

“I’m passionate about sailing, the archipelago, nature and adventure, and I love to share that passion with other people. Sailing has brought me self-confidence, humility, and a meditative calm, while giving space for my curiosity and zest for adventure. I want to open that door to other people and, while adapting to individual needs and expectations, make them grow and discover themselves in relation to sailing, to handling a boat and to connecting with nature.”

Karin’s education and experience in brief:

Thomas Bindzau is just like Birgitta sailing a Linjett 35, Shere Khan. He is an adventurer, a sea-scout leader and a great coach. He loves to take his guests to places, both physically and mentally when it comes to learning to sail and experiencing the archipelago.

Also, Thomas loves sailracing. Recently, he has started racing shorthanded – meaning that you are just one or two persons on the boat. Cool, if you ask me!

As a sailcoach and skipper he is very calm and curious about what the participants wish to learn and accomplish. He is in fact very interested in coaching, in seeing people grow and find out about the mystery of sailing.

Sailing with charterguests he is a wonderful guide to the archipelago and to sailing.

Thomas’ education and experience in brief: 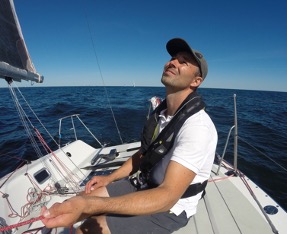 Sailing and manoeuvring coach on sailing boats and motorboats

Jonas Dolk is a passionate regatta sailor who lives in the archipelago and spends several months per year around the islands. He is an experienced coach and leader.

Jonas has experience from sail racing on all kinds of boats, during the past ten years mainly from Double handed class races. Jonas loves sharing his knowledge about sailtrim and he is an expert on all technical aspects of boats. Time permitting, he happily takes on coaching sailors who want to learn about advanced sailtrim, manoeuvring and more.

Jonas’s education and experience in brief:

Anna Drougge is our most passionate regatta sailor. She spends most of her time off duty on sail racing, and she is a highly appreciated coach when it comes to sailtrim.

Anna loves sharing her knowledge about sailtrim and efficient sailing. Time permitting, she happily takes on coaching sailors who want to learn more about advanced sailtrim, as well as how to maximize the speed of their boat. The coaching takes place on your own sailboat.

Anna’s education and experience in brief: 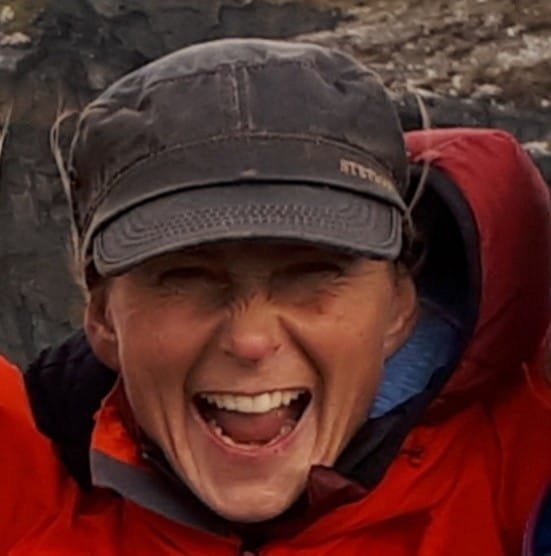 Kim Silfving has been sailing for as long as he can remember. He is a highly experienced coach and skipper in all sorts of sailing, mainly sail racing, and he loves to share his knowledge with other sailors.

“I grew up sailing on a wooden sailboat in the archipelago of Stockholm. My father took me in as crew member at races from early on and when I was 9 I continued on to other teams.

My first own boat was a J/80 which I bought together with my best friends when we were about 20 years old. We raced her very frequently for 5 years on different regattas and a few offshore races. We developed, laughed and learned a lot during those years.

After that I kept on racing in different teams on a range of different boat types. I have been racing in fleet, offshore and matchracing.

Since the kids arrived I have mainly focused on cruising and family sailing. During the last 5 years my wife and I have owned a Cayenne 42, then a Beneteau first 40.7, and currently a Baltic 51 – a 20ton beauty. Last summer we sailed her from the south of Portugal all the way up to Stockholm. Now the plan is to take her for a circum navigation.

Parallell with my profession as a director of photography in film and television I have been working as a skipper in the Mediterranian. I have also coached event sailing and held courses for both beginners and more advanced clients with focus on trimming and spinnaker sailing.”

Kim’s education and experience in brief: